Some Love for Citizens 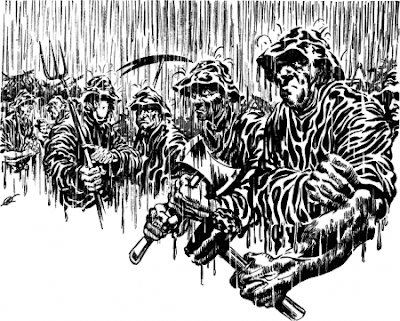 In a recent post at the Trollhalla Outer Sanctum Paul Ingrassia of the Troll Hammer Press blog has done an excellent job looking at playing the Citizen type of the 7th edition rules.

While the Citizen type has been frequently maligned and even Ken St. Andre advised against using them as player characters, I too think that they are very playable and could be a lot of fun.

So what can Citizens do and what's so unplayable about them?

Combat: Citizens can wear armor, use a shield and can wield any weapon but they only get half of their personal adds.

Magic: Citizens can use magic just as Rogues do but they must make a SR on INT and DEX to successfully cast spells and they do not start with any spells.

Talents: Citizens receive talents just as other types do.

That's not too bad. A Citizen can wear armor, use any weapon, and cast spells. They're not highly skilled with arms or magic, but they can be useful in a fight. The penalty to personal adds may even be insignificant at low levels. How high are the personal adds for most first level characters after all? Plus if your character already has 0 personal adds, there's no penalty at all.

There have been questions about why a Citizen would be able to use any type of weapon in the first place. My own rationale for a Citizen's combat ability is that Citizens may have been called upon to serve in a militia. Perhaps they serve a set term in their youth, where they receive some training with weapons such as swords, spears, axes, polearms, bows and so on. So they are at least a little familiar with the weapons even though they may have never used them in combat.

As far their ability to learn magic, if Rogues can do it why not others with the necessary intelligence? This is supposed to be a fantasy world after all and magic is everywhere.

A party of Citizens, or even a solo Citizen, can make for interesting adventures. Maybe a war party of goblins has attacked a village. The traditional RPG formula is that a band of highly trained adventurers just happens to wander into town at which time the poor, helpless townspeople offer the adventurers a reward for their help. But what if instead a group of adventurous citizens decide to gather what arms and armor they have, form a posse and head out after the goblins to seek revenge/rescue family members taken prisoner/recover some precious item that was stolen. What could be better than that? I for one would love to play in that game.

So, here is my citizen to stand alongside those of Paul Ingrassia and chase down those vile goblins:

Background: Gustave runs the kitchen at the Lion's Head Inn. He was taken in as an apprentice cook at the age of 10 and has been in the kitchen ever since. Gustave displayed an uncanny talent with cooking, able to turn the even the foulest ingredients into fantastic and nourishing meals. When he turned 16, Gustave's intelligence and physical endurance led him to be drafted into the town militia where he received some rudimentary training with a few weapons. Five years later he still serves in the militia but has never seen combat. Despite that fact he has become familiar simple weapons such as a spear and small blades, but prefers his cleaver most of all.

An interesting note about Gustave, he does not start off any worse than a Rogue using the 5th edition rules. He has no adds to start with so suffers no penalty in combat. So it is hard to argue that this is not a playable character. This will clearly change if Gustave survives and increases in level, but as was stated so well by Paul, with Citizens it is all about the role playing.
Posted by Dan at 2:00 PM