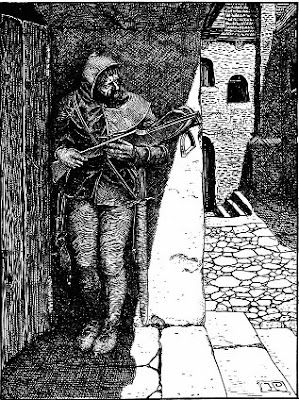 One of the major changes to the Tunnels and Trolls rules in the 7th edition of the game was the addition of Talents. Talents are not clearly defined skills, but are instead more broadly defined sets of abilities. Talents are based upon a single attribute (usually) of his/her choice. Once the player chooses a talent he/she rolls 1D6 and adds that number to the attribute. That modified number is the level of the attribute and is used to make Saving Rolls whenever the talent is brought to bear. Talents are not codified in the rules, but instead player are encouraged to come up with their own. It's very a T&T concept. There were a few defined Talents, however, and one of them was Roguery.

Roguery is the talent of Rogues. All Rogues start with Roguery as their talent and it is the most loosely defined talent that you can imagine. Roguery is based upon the highest attribute out of Luck, Intelligence, and Charisma. The Rogue then rolls 1D6 and adds it to the highest of the three attribute for the Roguery talent. The Rogue then may use this value in place of ANY Intelligence, Luck, OR Charisma Saving Roll. The idea behind this is that Rogues have spent their lives relying on their Intelligence, Luck, and Charisma to see them through trouble whereas Warriors have used weapons and Wizards magic. Overall I think it was a way to make 7th edition Rogues more appealing as starting characters than 5th edition Rogues (something I've commented on previously).

After running through some play tests with a few Rogues, however, I feel that the Roguery talent is a bit over-powered as written. Granting a Rogue the ability to use the Roguery talent to replace ALL Saving Rolls on Luck, Intelligence, and Charisma just seems a bit overboard. Think of all the actions that a Rogue may engage in to require a Luck, Charisma, or Intelligence Saving Roll. With Roguery a Rogue can pick a lock, read books written in strange languages, charm a guard, identify plants and animals, avoid any and all traps, find any and all traps, locate hidden doors and treasure, crack secret codes, calm wild beasts, sing a snappy tune, win a game of cards, etc., etc., etc. The Saving Roll must still be made, but the odds are certainly good. Having Roguery pretty much negates the need to acquire any more talents.

I don't have anything against the Roguery talent itself, but I do think it should be a little more restrictive. I think instead the Rogue should be given the choice of basing the Roguery talent on either Luck, Intelligence, OR Charisma at the time of the character creation. The Roguery talent could then be used in place of any Saving Roll based on that attribute regardless of the action. This restriction would still make for a powerful talent, it's not based on any particular skill set after all, but not a ridiculous one. This would also allow for some more customized Rogues. The lucky, smart, and the suave.
Posted by Dan at 11:35 PM