More on Human Advantages in T&T 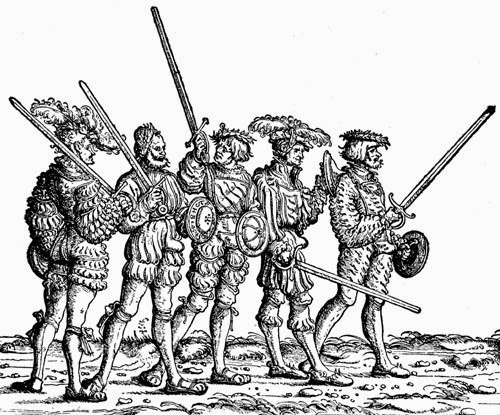 I've been thinking more about the "human advantage" introduced to the dT&T beta rules. This one rule change sparked more discussion than any other aspect of the dT&T rules (although pole arms may now be getting close). In previous editions of T&T, humans were the plain vanilla of kindred. As Ken explained humans were the base line against which other kindred were compared. While other kindred received no special abilities like in other fantasy RPGs (seeing in the dark, detecting hidden things, hiding, shooting, etc. better than humans), they did (and still do) get modifiers to their basic attributes, some positive (up to 2x) and some negative (down to x0.25). Human attributes remain at whatever was rolled on 3D6. The end result is starting nonhuman PCs with some very high attributes and very high Personal Adds in comparison to humans.

A big change that came with 7th edition was the direct linking of attributes and levels. Characters increased their attributes by spending Adventure Points. A characters level increased whenever an attributes went up to the next 10 value (10 = 1st level, 20 = 2nd level, 30 = 3rd level). Characters received certain bonuses partly depending upon their Type upon reaching new levels. As a consequence of this change, nonhuman characters tended to benefit the most typically starting as 2nd or even 3rd level characters and outclassing their human comrades. A freshly rolled human warrior in comparison to a freshly rolled dwarf warrior were very different.

Another important change to dT&T is the removal of "negative adds" or -1 Personal Add for every point a PA-contributing attribute is below 9. The consequence of this is that low attributes resulting from nonhuman kindred modifiers do not affect Personal Adds and combat effectiveness.

Let's create a dT&T Warrior character as an example:

Rolling 3D6 you get the following attributes:

If you decide to play a human warrior your attributes are what you see above and your character will be a Level 1 Human Warrior with +6 Personal Adds and +1D6 in combat.

If you decide to play a dwarf warrior, however, your attributes will be adjusted (x2 STR and CON, x0.75 LK) and come out to:

Now you will have a Level 3 Dwarf Warrior with +20 Personal Adds and +3D6 in combat.

That is quite the difference at a cost of only 3 points of Luck. That's right, 28 extra attribute points at the cost of only 3. That's hard to pass up. If you're curious, that comes out to 5860 adventure points to raise STR and CON to those levels.

As an added note, the attributes of this dwarf allow him to wield two axes for 10D6 in combat. So that's 13D6+20 for this freshly rolled Warrior. Wow.

Many have said in response to the dT&T human advantage rules that they are not needed because there is nothing wrong with the current system. I would argue that the example above shows that there is at least a small problem. While there are certainly role-playing reasons to play a human warrior (I tend to make this choice for my own reasons) there are certainly not many "roll"-playing reasons. Mechanically the human is outmatched and a terrible choice especially as a warrior.

I have wondered why the nonhuman kindreds get such large attribute boosts. As starting characters many of these boosts seem a little excessive (like the example above). It could be that nonhumans are meant to be favored (I know Ken prefers the more monstrous characters); it is a fantasy game after all. But my question is, if a nonhuman character did not have any attribute boosts, would you still play one? Why not have a greater "balance" of the attribute modifiers? Wouldn't it be more symmetrical to have negative modifiers equal to the positive modifiers? If a dwarf, for example, gets x2 in both STR and CON, shouldn't the dwarf also get a x0.5 to two other attributes such as LK and CHR? That would sit better with me.

Another question is why don't humans get any special advantages? This is actually true of most RPGs; humans are the rather plain go-to characters for new players with no complicated abilities to keep track of. But why? Humans certainly have special abilities. We are incredibly adaptable, imaginative, inventive, capable of radically modifying our surroundings, and somehow, against all odds (so far at least), survive.

A separate human advantage provides some more flavor for the plain vanilla human. Perhaps the "do-over" Saving Roll rule introduced by the dT&T Beta rules was a bit of an over-compensation, but I do think that it is on the right track. Finding a way to apply an advantage to Saving Rolls reflects the nature of humans. As I mentioned in a previous post, bringing back the "add level number to Saving Rolls" rule and giving that advantage to humans only would be better or at least state that in the "do over" rule fumbles always fail. Yet another method would be to allow humans to make all Saving Roll at one level less than normal, but with a minimum of a Level 1 Saving Roll. Of course this would have the potential disadvantage of a lower adventure point reward, but such is the nature of kindred modifiers (they giveth and taketh away). An option outside of Saving Rolls, which I've mentioned before, is to provide humans with more resources at the beginning, either in terms of more starting gold or just some select pieces of equipment.

Yet another avenue would be to highlight some of the disadvantages of nonhuman characters. Height, for example, can be a big issue. Dwarves, leprechauns, and hobbs are all shorter than humans and should, therefore, have trouble reaching things designed for taller kindred. Let's say a leprechaun was exploring an ancient manor of a long-dead human family and discovered a safe set in the wall. The leprechaun should not be able to reach that safe and would need to overcome that obstacle before even considering how to pick the lock. The same is true of items that may be discovered while delving. Most armor that is found should not be dwarf-, hobb-, leprechaun- or fairy-sized (although it certainly should not all be human-sized either). The same is true of weapons, shields, rings, necklaces, bracelets, etc. many of which may have magical properties. You could also consider mass. Ken's dwarves are supposed to be made from stone; so can dwarves swim? Nonhumans may also be a lot less resilient and adaptable that humans, living in specific environments and generally not wandering far from home. This could be reflected by requiring higher level Saving Rolls when faced with challenges outside of their "comfort zones." But isn't all this a little more complicated than simply giving humans an advantage to reflect their own resilience?

This is all, of course, simply my own opinion and we are all entitled to our own especially when it comes to esoteric topics like RPG rules. When dT&T comes out I will certainly be playing it (I have already paid for it after all) both as written and, as usual, modified with lots of house rules as it's creator, the Trollgod, intended.
Posted by Dan at 9:52 PM