For the third installment of this series of posts, here are my currently favored House Rules for character creation. Once again, these are modifications to the 5th edition rules, so some of them are standard rules using the 7th edition rules.

Each character has the standard six attributes (Strength, Intelligence, Constitution, Dexterity, Luck, and Charisma) as well as Wizardry.

I like to have a separate attribute for powering spells as I stated in my last post on Magic-related House Rules.


To generate attributes, roll 3D6 seven times and arrange the scores in the order desired. You may re-roll any 3s.

I don't typically follow the "assign 3D6 in order" rule. Giving the player the option of assigning values to specific attributes allows more customization of characters. One thing I like to stress in my games is that there are no "dump stats." Every attribute is valuable. Any attribute may be called upon for a Saving Roll. If everyone has a low Charisma, for example, there is going to be trouble.

Allowing players to re-roll any natural 3s that come up, since I don't allow TARO, prevents utterly useless attributes.

This gets back to some previous posts that I made about 5th edition rogues. I think that they should start with at least one spell (as they now do in 5th edition), but I like the idea of making the spell random with the idea that the rogue came upon the knowledge in a less than intentional way.

Everyone starts with warm dry clothes and a backpack (a 5 gp value!).

This is just a gift that I like to give. Of course, players still need to make sure that they purchase some footwear with their starting gold. 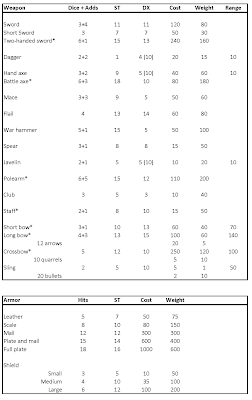 I've presented this table in a previous post, and in implementing it I like it a lot. Keeping track of the dice, adds, cost, weight, and attribute requirements for the exhaustive weapons and armor lists can be a chore. This system makes it easy and it certainly speeds up character creation. Players are welcome to call their general weapon type whatever they like. So a "sword" can be a broadsword, saber, scimitar, or rapier; but they all have the same stats. This system also makes it easier for the GM to equip any opposition and stock shops.