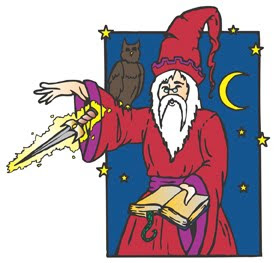 Next up in my list of house rules for my online T&T games are Magic-related rules. Remember that these rules are modifications to the 5th edition rules and so some are "actual rules" from the 7th edition. There are two basic rule categories here: 1) Wizardry, or the powering of spells, and 2) Spell Effects, clarifications or additions to some first level spells from the 5th edition rules.

Wizardry (WIZ) Attribute : Determined by a roll of 3D6 during character creation. WIZ is not affected by kindred. WIZ is a pool of energy for spell casting. If WIZ is reduced to 0, then the caster falls unconscious. WIZ may also be used in saving rolls against some magical attacks and devices. The Saving Roll level is the level of the spell plus (or minus) the difference in the level of the caster and target (if applicable). The Saving Roll must at least be Level 1.

A separate attribute to power spells is an old house rule for Tunnels and Trolls. It has been called many things including Mana, Arcane, and Power, I just happen to like the name Wizardry which Ken uses in 7th edition. The chief advantage for having a separate attribute to power spells is that the Wizard (or Rogue or Warrior-Wizard) does not lose Strength which powers spells according to 5th edition. This use of physical strength obviously has many disadvantages for the character related to combat effectiveness and the ability to carry things. This can also be a book-keeping problem for the GM. While only spell-casting characters get to actively use their Wizardry, all character types have this attribute and may need it to make saving rolls on if they fall under magical attack of one type or another. A warrior, for example, may never be able to cast a spell, but with a high Wizardry he would be able to withstand the effects of many spells which might charm him (Yassa-Massa), instill fear (Oh Go Away), put him to sleep (Rock-a-Bye), hold him in place (Glue-You), or otherwise affect his mind or body.


Wizardry Recovery : WIZ is replenished at a rate of 2 points every 10 minutes when actively resting (sleeping, meditating, etc.).

I like to require active rest for Wizardry recovery rather than just gradual recovery while walking around. This is primarily a bookkeeping issue (Wait, how many minutes have you been walking around? But you ran part of the way.), but it also forces the players to stop and rest regularly if they want to regain the ability to cast spells. I find that this encourages better resource management and reduces the barrages of TTYFs at anything that moves.

Take That You Fiend! : Damage taken by TTYF can be reduced by normal and magical armor. However, normal armor that is used to absorb damage from a TTYF spell is 'burned off' in the process, permanently losing the number of hits absorbed in protection value. Armor doubling for warriors still applies. Burning armor is optional and is at the player's discretion if targeted by a TTYF.

The 5th edition rules are not clear if armor provides protection against magical damage. The 7th edition rules state that TTYF does not affect inanimate objects (this includes armor IMO). For TTYF in my game, however, I decided that armor can provide protection, but at the price of damaging or destroying the armor. In my game world, casting TTYF produces a bolt of magical energy that explodes on contact, burning and blasting armor and flesh. I mainly designed this for the benefit of the player characters who had the possibility of going up against a large number of first level wizards. If armor was not effective against TTYF, they would have been in trouble of hostilities arose.


Oh Go Away : Wizards may cast this spell on a single target or multiple targets, but the number of targets must be stated prior to casting. If more than one target is chosen, their MRs are added and treated as a single target score when determining if the spell has had the desired effect.

This is another point of clarification for the spell description in 5th edition. I've found it works rather well and players will typically overestimate the strength of their opponents.


Detect Magic : Wizards and Warrior-Wizards may normally detect magical properties of items or creatures at no expense of Wizardry. Wizards, Warrior-Wizards, and Rogues may also expend additional Wizardry to have a chance to learn the nature of the magical properties. The chance of divining the identity of the magic and the amount of detail revealed is a function of the level of the spell-caster and the amount of Wizardry expended.

I first saw this house rule in action in Ragnorakk's play-by-post game at the Trollbridge. It worked so well I decided to use it myself. I tend to use my own judgement on how well the spell works and how much information to reveal since the number of possible circumstances and variables are so high. However, more is always better, so if the player wants to commit a large amount of their Wizardry I'll give them a lot of information provided the magic is not too powerful.


Knock Knock : This spell will unlock mechanically or magically locked doors but it will not open them. The door must be physically touched by the caster for the spell to work.

No casting this spell from a distance. If you want to unlock the door you have to touch it and potentially face the consequences of doing so. I also felt it was necessary to state that the door must still be physically opened by someone, again facing the possible consequences.


Vorpal Blade : May be cast on any bladed weapon (sword, dagger, axe, spear).

This is a minor distinction from the 5th edition rules which state only swords and daggers are affected. The 7th edition rules state Vorpal Blade may be cast on any bladed weapon, which makes sense to me so I use it as well.
Posted by Dan at 12:30 PM