The two current offerings available are: 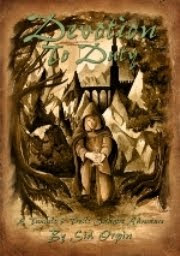 Devotion to Duty is a mini solitaire adventure for use with the Tunnels & Trolls™ role-playing system created by Ken St.Andre. It has been designed for use with version 7.5 of the rules but can be used with earlier editions. Within its 90 adventure paragraphs you take on the persona of a novice of the great Goddess Hoepht in their struggle to pass the trials of progression. Succeed and you will become an initiate of your deity, fail and you will be cast back into the secular world from which you came. 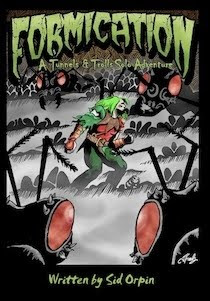 You are a newly commissioned officer in the Royal Guard of the fairy kingdom of Cerinor. Captured by your sworn enemy,the batkin hordes of the Marble Mountains, you have been sent into a nest of giant fire ants to retrieve ant larvae for the delectation of the batkin hierarchy. Can you survive in the claustrophobic confines of the ant colony long enough to be able to attempt to escape or will the creatures of entomological nightmare within put an end to your adventures for good? Formication is a mini solitaire adventure for use with the Tunnels & Trolls™ role-playing system created by Ken St.Andre. It has been designed for use with version 7.5 of the rules but could easily be used with earlier editions.

Each solo is well-illustrated and includes covers with original full-color artwork. They're a bargain at only about $3 apiece.

Print copies of these and other adventures from Tavernmaster Games are still available at Lulu. But whether you like print or pdf, pick up your copies today and keep an eye out for new releases. You won't be disappointed.
Posted by Dan at 1:36 PM