The Tavern by the Sea: UK Edition on RPGnow 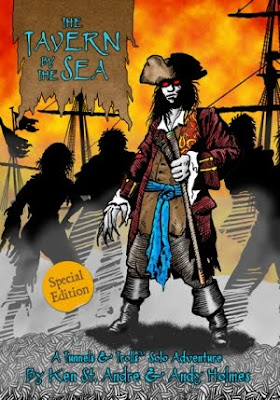 Tavernmaster Games has released it's third solo in pdf format at RPGnow and DriveThruRPG. The Tavern By the Sea was written collaboratively between Ken St. Andre and Andy Holmes. A first edition of The Tavern was released by Flying Buffalo that included artwork by David Ullery and notes for converting the solo to a GM adventure. This new UK edition has completely new illustrations by Jeff Freels including the terrific full color cover and includes a new mini solo adventure that can be accessed within the Tavern adventure. Need one more reason to give this one a look? All proceeds from the sale of this adventure will go the the Jeff Freels Transplant Fund. Both Jeff and his wife are in need of kidney transplants. Jeff is a great guy and a true friend to the T&T and RPG community.

THE TAVERN BY THE SEA

The Tavern by the Sea is a mini solitaire adventure for use with the Tunnels & Trolls™ role-playing system . It has been designed for use with version 7.5 of the rules but could be adapted for use with earlier editions.

A hundred miles south of Knor lies the fishing village of Frargg, home to the infamous Seven Ayes Tavern. The Seven Ayes has become synonymous with all manner of seaside tavern life including brawling, sea shanties, gambling, ruffians and pirates. It is also a good place for adventures to begin, and to end. Step inside, where your next adventure awaits, but tread with care my friend, as danger lurks within and death could be just a moment away…

This special UK version of this solo features additional material as well as completely new artwork by Jeff Freels. Jeff is a great friend to all of us at Tavernmaster Games and to the world of Tunnels & Trolls as a whole. He desperately needs a kidney transplant and all the proceeds from this project will be donated to his transplant fund.
Posted by Dan at 2:38 PM