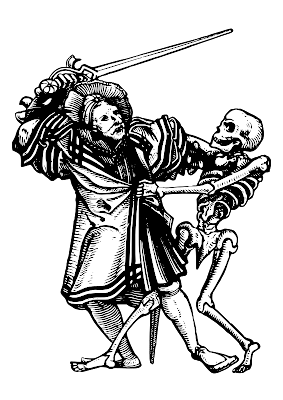 One of the more difficult aspects of designing a solo adventure is coming up with opponents and obstacles that will only kill the intrepid delver some of the time. Hopefully this will be because the player did something foolish or in some cases had a bad run with the dice. Chance does always play a role in how an adventure turns out after all.

First up are the monsters and other combative inhabitants of your tower, tunnel, or maze. These are the life blood of any adventure. Who else are you going to get your gold, silver, and jewels from? Obviously the first thing you need to consider is the potential strength of the characters who will be taking on your adventure. Generally solo designers present a range of personal adds that characters should have. In T&T this is the best measure of a characters abilities; typically a better reflection of their prowess than level. The difference between designing encounters for a GM run game and a solo game is that the GM is able to alter the situation to match the characters. If the gang of goblins that hangs out in room 5 is too tough for the current group of first level characters, their MRs can be easily reduced an appropriate amount along with the size of that sack of coins they currently arguing over. Not so with solo adventures. Of course you could always 'cheat' and lower the MR of the monster you are facing, knowing that at it's current strength it will reduce you to a pile of bloody goo before you can draw that dirk for a couple of extra dice. But, how do you know that you were not supposed to be killed in this situation? Maybe you were supposed to talk to it, go around it, or just run away. I have done my fair share of altering solos as written when fights seemed a little one-sided (I've even increased MRs to make things interesting). But in doing so you also run the risk of altering the intent of the designer. Also, how do you reduce the reward to account for the reduction in risk?

With that in mind, the designer should be certain that the foes put in place to threaten any would-be plunderers are well-suited to provide a challenge but not be a push-over or an instrument of death and destruction. That's not saying such encounters cannot be in your solo. There can always be the occasional light fight with some rats, large spiders, half-starved elves and the like to add some flavor to the game. There can also be the impossible fight with that beast that the player should have talked to or run from. If Mekron the Mighty insists on fighting the two-headed dragon then so be it; let him find out the dragon has a MR of 500. He is a dragon after all.

So what makes for a challenge? For a character with 10-20 adds one or more foes with MRs of 10-50 tend to work best. I assume most solo delvers are using two weapons and can muster 4-5 dice and 5 weapon adds. That would give a typical 10-20 add character 4 + 20 in combat. A tough MR 50 monster, lets say a four-armed ape guarding your caged fiancee, gets 6 + 25. That would be a rough fight requiring some good rolling on your part or at least bad rolling for the ape. Most designers, however, would present some extra gadget that would increase the characters fighting power before the final battle, perhaps a potion that increases strength, a dagger that provides an extra die, or magical boots that gives you an extra attack. Of course, the design allows better character to join the fun as well, so the designer may have some other goodies out there that reduce the fighting effectiveness of the hero. For higher level characters, with 20-30 add, stock your solo primarily with foes of MR 30-60. Characters with 30-40 adds should mostly be facing creatures with MRs of 70-100.

When sending lots of low MR monsters against the delver, it is important to remember that five MR 10 goblins have more offensive power than one MR 50 troll. They get the same number of adds (25) but more dice (10 vs. 6). That makes perfect sense since the five goblins can work together to surround and cut down the unsuspecting, solitary adventurer. To give the player a fighting chance, provide some options. Maybe the foes are slow moving like zombies. Let the player make some SRs on SPD or DEX to avoid most of the zombies and attack them one or two at a time. Maybe there is a doorway or narrow hall that the delver can retreat to and fight only a few at a time. That calls for another SR on SPD or DEX to make it there, otherwise he is facing the entire horde.

Traps and similar obstacles are a good way to slowly wear down those pesky delvers before they even get to the first monster. There are lots of nefarious methods to slice, dice, snare, smash, and pummel delvers without risking the life of a single innocent monster. Trip wires, darts, crossbows, pits (spiked and unspiked), acid buckets, gas (, sleeping, blinding, exploding), flying razor blades, nets, bear traps, and rolling boulders are just a few ways to get the job done.

Knowing what the effect of traps should be can be another problem when designing a solo. Traps that kill outright are not much fun for anyone. It's much better to reduce the unfortunate characters abilities by 1D6 points at a time. This can be equally bad for low and high level adventurers (of course more so for the low). If you are designing a solo for characters with an average CON of 12, then have most of your traps only do 1 or 2 points of damage. If some of the damage can be absorbed by armor, then go up to 1D6 or even 2D6. The key is to know your potential . However, if a trap does have the potential to cause massive damage, say a crossbow trap that causes 8D6 points of damage, then allow some Saving Rolls; one to avoid the trap altogether and a second to reduce the damage by ducking at the last second.

But remember, no one says you cannot kill the characters that enter the dark corridors of your imagination; you just need to give them a fighting chance and let one or two of them make it out alive to tell others of the fabulous riches that lie ripe for the taking. That way your monster horde has a continuous supply of food and fun.