The Lost Continent = Campaign Gold Mine 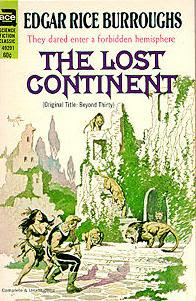 I have just started reading The Lost Continent by Edgar Rice Burroughs. I'm only a few chapters in but I see the book as a potential gold mine for a science fantasy RPG campaign setting. Given the swashbuckling, seat-of-your-pants style of Burroughs, Tunnels and Trolls would be an ideal rule system to use and capture the spirit of the novel.

The Lost Continent was written in 1915 and was quite heavily influenced by the First World War. In this world the countries of North and South America united and enacted an extreme type of isolationism to protect themselves from wars raging across Europe and Asia. All communication was cut off, vast navies patrolled along 30 and 175 degrees W longitude, maps and histories were rewritten. The story begins in 2137, about 200 years after the isolation. The captain of a naval vessel is lost at sea with three crewmen after his ship is blown past 30 as a result of a storm and sabotage. Captain Turck then makes his way toward the shores of England. He hopes to find safe harbor and an equally advanced civilization; instead he finds the old world in ruins and new barbarous cultures still locked in bloody conflict.

This is a classic sword and planet style adventure set right here on Earth. The number of possible adventures available to a creative game master are almost limitless. I'm looking forward to finishing this book to see how ERB shapes this new world. It is rather short, so there are sure to be many unanswered questions, but that just provides more fuel for the imagination. Given the nature of the story it would also make a perfect solo campaign.

Adapting the T&T rules to this setting would be simple. Obviously magic does not exist in this world, but technology does so you can replace the Wizard with Scientist and Engineer. Warriors are still warriors and Rogues can continue as the jacks-of-all-trades having skill in fighting and technical know-how. Next you just need some firearms and gadgets. You can keep the amount of technology to a minimum, however, by employing the 'lost at sea' or a similar type of starting point. Maybe everyone has a loaded sidearm with 15 rounds. That would keep gunplay to a minimum. But this is T&T, so each weapon only needs some dice and adds and a maximum effective range. The rest of the T&T mechanics, attributes, saving rolls, and combat, are perfect as they stand.

From there you have ruined remnants of all of Europe, Asia, Africa, Australia, and countless Pacific islands to explore guaranteeing that no two campaigns set in this world need be the same. Sounds like fun to me.
Posted by Dan at 11:19 AM