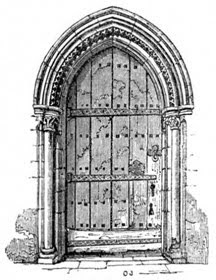 An important consideration when writing a solo adventure is how many choices you want to give the player in each paragraph. Often this is easy, you can go one of two or more different directions. The problem comes when the player is entering a room or similar area of potential danger or action. The number of possible actions a delver could perform become much more numerous and complicated at this point. The trick in solo writing is to reach an acceptable balance between giving the player enough choices so that he/she does not feel railroaded and keeping the choices limited enough so that your solo does not contain thousands of paragraphs. I'll provide two examples to illustrate this point.

Take the very simple and common occurrence of when a character arrives at a closed door. There are a number of possible actions that could be undertaken by the player in a GM-run game. The character could listen at the door, check it for traps, peer under the door looking for light or smelling for odors, try to open it slowly and peek inside, open it quickly and barge inside, or charge into the door and break it open. I'm sure clever players out there can think of even more ways to approach a problem as simple as a closed door. Often in solos, however, the player is only presented with the option of opening the door or leaving it and going back the way he/she came. At most the player might be able to listen to the door or check it for traps. Of course with those four simple choices the author has to write several different paragraphs. The solo writer must also be consistent. If you offer the chance to listen at one door or check it for traps, you had better do it for every other door or else it will be very obvious which ones are trapped and which ones are not.

What about when faced with a trap? The simple option is to assign a Saving Roll on Intelligence, Dexterity, or Luck (or two or even all three) to see if the character is able to, at best detect the trap, or at least avoid setting off the trap, escaping the effects, or minimizing the damage. I'll often allow players to make several Saving Rolls to do most if not all of these things. Otherwise my tunnels would become clogged with delvers peppered with crossbow bolts, spears, darts, and other pointy objects. In a GM-run game, players will often announce they are checking for traps. They may announce this for every 10 feet of movement and every door, archway, or statue they come across. This is good for satisfying the appetite of wandering monsters, but when do you provide this choice in a solo adventure? Providing the choice gives the hint that there is a trap to detect in the first place. Making the whole process completely Saving Roll dependent removes the players imagination and resourcefulness from the entire experience.

One way around the problem of having an excessive number choices leading to an infinite number of paragraphs is to have the player write down exactly what he/she is going to do and then direct the player to the next paragraph. The next paragraph then includes a number of outcomes depending on what the player decided. Here is a simple example:

23. You open the door and see a 40' long, brightly lit corridor that ends at another door. If you walk down the corridor, write down how you will move and what actions you will take and go to 67. If you close the door and return to the room you were just in, go to 45.

Now the player can write down what actions he/she will take including activities such as checking for traps and secret doors and even how quickly he/she moves (creeping, walking, or running). In the next paragraph would then include outcomes depending on what actions were taken.

Now you give the character a chance to spot the trap given a specific set of actions provided by the player. Of course you could also turn this around and have a wandering monster come along as the character takes a long time searching for traps and secret doors that do not exist.

Here is a more complicated example:

12. You are at an open archway leading into a small chamber. The walls are blackened with soot and ash covers the floor. Another open archway is in the wall directly across from your current position, perhaps only 20 feet away. If you enter the room, write down exactly how you will be entering including the speed you move (slow, normal, fast), your stance (upright, crouching, crawling), and the direction you go (left, right, straight ahead) once you pass through the archway, then go to 45. Otherwise you must go back the way you came; go to 97.

This reliance on the player to indicate how they are entering the room eliminates the need for the write to provide multiple separate choices and corresponding paragraphs for every possible combination. For example:

If you crawl into the room slowly, go to 12.

If you walk into the room slowly, turning immediately to the left and sticking to the wall, go to 13.

If you lay down and crawl directly across the room to the open archway on the other side, to 14.

If you run across the room to the open archway, go to 15.

Instead, the player writes down a specific set of actions and then turns to the next paragraph eliminating the need for multiple paragraph choices. This also prevents the railroading that often occurs in solos where the player is restricted and, worse yet, often guided by the choices provided by the author.

In this example, the only wrong move was to move through the center of the room triggering four flame-spewing cannons. Slowly crawling through the middle will likely result in one well-done delver.

14. As you enter the center of the room you hear a loud click following by a shrill whistle. This is followed by a sharp tang in the air. Suddenly huge sheets of flame erupt from the ceiling and the walls to your left and right. If you were running, you may make a L2-SR on DEX to avoid the worst of the flames and reduce the damage sustained by half. Otherwise you take 6D6 hits to your CON. Shields will provide full protection, but any hits absorbed by body armor must be permanently deducted from their protection value (players choice). If you survive, go to 27.

This is a work in progress and there are many, many problems to work out before I would try to produce a complete solo using this method. But in the end I like the idea of writing this way. The number of choices you provide can greatly increase the flavor and excitement of a solo adventure. Choices make players more involved in the adventure, so that they are doing more than moving from room to room opening doors and killing innocent monsters and making the occasional saving roll to avoid certain doom. Give the players a chance to think every now and again. Then throw five starving zombie trolls at them.
Posted by Dan at 7:00 AM