Were-Types in Tunnel and Trolls 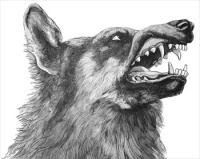 The 5th edition Tunnels and Trolls rules include a short section on using were-types for characters. These are restricted to humans only and a few examples, such as werewolves, werebears, and weretigers are presented with some attribute modifiers when in were-form. Werewolves have their STR and CON multiplied by 3 while werebears and weretigers have theirs multiplied by 7/2. In all cases, wereforms have a DEX of 3. There is also the stipulation that character should be required to remove their armor before transforming, otherwise you could end up with a wolf in plate armor. That's about it. The 7.5 edition rules don't mention were-types at all.

I never really paid much attention to were-types, but I made them available to players in my Play-by-Post Lost City campaign over at the Trollbridge. Two players took advantage of that option, including werewolf and a werebear. The werebear had the unfortunate luck of having a Dexterity of 3 in human form giving him -6 personal adds. This made the option of a were-type very appealing to the player I'm sure. Having such a low Dexterity has made for some interesting situations. The player has done an excellent job of portraying the character as having , sausage-like fingers. In one battle he actually had a negative combat total and injured one of his comrades.

The lack of rules dealing with handling were-types has led me to let the players run them as they see fit with little regulation on my part. This has led me to some questions while running the game and some on-the-spot House Rules.

How does and how often can the transformation occur?
This is one of the most fundamental questions to answer when using were-types. The were-bear has changed back and forth between human and bear over and over again. Given his negative personal adds in human form I cannot blame him. But should were-types be able to transform back and forth at will, or should there need to be a trigger? The trigger could be many things. Having to wait for a full moon would be rather frustrating; but how about stress, anger, physical pain, or looking at a magical talisman? These would all be useful ways to control your were-types. If the character needed to be wounded in order to change, that would limit the willingness to do so. If the trigger were magical in nature, there could be a set number of times the character could transform each day. What if that talisman were lost while in were-form?

How much time does it take to transform?
This is one very practical question for which I made a written rule. It takes one full combat turn to make the transformation. If the character is wearing armor, it takes another full combat turn to remove the armor before the transformation can begin. I find these time constraints rather generous given what is involved. Neither of the were-types in my game started with any armor. The werebear has a shield and has recently acquired a leather apron and gloves that he can quickly discard.

Does the were-form recognize his/her companions or should it be treated like a berserk fighter?
I have been running with the assumption that the were-forms have no change in cognitive capacity. They fully recognize the other members of the party and work consciously as part of the group. One could require that they be brought back under control after combat much like warriors that have gone berserk. This would require a character with a Charisma of 15+, a successful Saving Roll on the were-types Luck by the character with the highest Charisma, or a spell that could knock the were-type unconscious. The fun part comes when one of these methods does not work.

Does it take a special weapon to harm the were-type?
The simple answer here for me is no. In most games you would need a silver or magical weapon to harm a werewolf or other were-type. With were-types as characters that has serious consequences. Of course if you rule that any type of weapon (sword, axe, tooth, claw) can injure a player's werewolf, then the same has to apply to any other werewolves the group encounters.

How do you handle CON loss when changing from were-type to human form?
When a character takes damage in were-form, how does this transfer to the characters human form? In other words, if your werewolf loses 3 points of CON while in wolf form, when you turn back into a human have you lost only 1 point of CON or the full 3? This presents an interesting problem since the were-forms can take much more damage than the characters human body. The situation could occur where transforming back to human form would mean the characters death. That could be another interesting control on transformation. So far I have been letting the characters take only a fraction of the damage to their human CON that they sustain while in were-form.


I'm sure that there are many other questions that will need to be answered as the game progresses. Right now I am letting the players run these characters as they see fit and so far neither player has done anything that has required my intervention. In fact, they have been pretty entertaining. The presence of the were-types has also not unbalanced the game. They both have about 20 personal adds while in were-form, but they only get 1 die in combat. Compare this to the dwarven warrior wielding two short swords who gets 6D6+11 in combat. Has anyone else played a were-type in T&T or refereed a game in which there were were-type characters? I'm interested in hearing how others have house-ruled these situations.