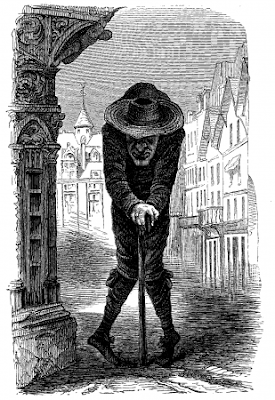 I really like this illustration. It's just creepy and weird. Who is this strange man and what is he hiding beneath that large hat? He looks fairly harmless, or at least he would in the light of day. But what if he suddenly stepped out of the shadows on a dark city street? Would you try to talk to him or just run away?

Officially this is Talebot the Hunchback from a 17th century engraving that I found on A Clipart History. He is standing in a Cours des Miracles in Paris, described as 'one of the worst built, dirtiest, and most out-of-the way quarters of the town.' That sounds just like the setting for 'One of Those Nights.' Look for this character there; or you may want to do your best to avoid him.