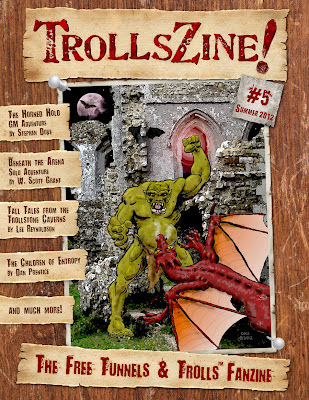 TrollsZine! #5 is here! The fifth issue of the fan-created magazine for Tunnels and Trolls™, edited by Dan Hembree, contains 91 pages of quality content brought to you by the fans of the game for absolutely free. This issue features a solo adventure, “Beneath the Arena”, a GM adventure, “The Horned Hold”, and a short story, “Tall Tales from Trollstone Caverns.” TrollsZine! #5 also includes articles describing bards in T&T, new ideas for making zombies more terrifying, rules for chariots and barding, a fantasy post-apocalyptic campaign world, elaborations for unarmed combat, and clarifications of the 7th edition rules.

TrollsZine! is a Trollbridge production brought to you with the kind support of Flying Buffalo Inc., Ken St. Andre, and Rick Loomis.

Get you digital copy of TrollsZine! #5 for FREE at RPGNow.

TrollsZine! #5 is my first issue as sole editor of the 'Zine. It has been quite an experience guiding this project from start to finish. I would like to thank all of the writers, artists, and copy editors that have helped to make this magazine possible. All of the material is freely donated by these talented and creative individuals. I hope that I have done their work justice.