Rest and Recovery in T&T 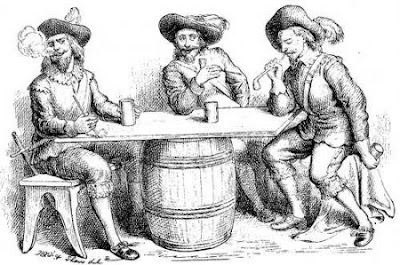 The idea of using short-term rest to recover from wounds is a common theme in most RPGs. Characters are always getting banged up, but sometimes you can't hole up in town for weeks on end waiting to heal. Those goblins need to be driven out now! In Tunnels and Trolls there are no clearly defined rules for recovering lost Constitution without the use of magic (Poor Baby) or some expensive items (potions, second aid kits, etc.). The Tunnels and Trolls 5th edition rules do contain a combat example where it is stated that an injured warrior will need at least a week to recover 4 points of her CON. This implies that natural healing takes a considerable amount of time but in a vague way. But this is one of the great things about the T&T system; little details are ultimately left to the game masters and players to decide. This allows for a lot of house rules and the generation of many creative ideas.

So what about recovering lost CON during short periods of rest in prolonged games when there is no time for extended periods of convalescence? I've encountered this issue while running a T&T play-by-post game at Role Play Online. The characters were all severely injured in a tough fight and decided to retreat from the dungeon they were exploring and return to the surface. Unfortunately they didn't have weeks to recover all of their lost CON; they needed to get back down there and finish the job they started. So I considered adding a house rule in which overnight rest (~10 hours) in a safe location with a roof over your head, a bed, and ample food and water allows some recovery of lost CON. My original idea was to recover 1D6 points of lost CON during this rest period.

My thought behind this house rule is that lost CON reflects fatigue, minor cuts and bruises and blood loss as well as actual physical injury such as deep cuts, broken bones, and head trauma. The latter types of injuries would take a long time to recover from. But simple exhaustion and some lacerations could be overcome more quickly.

But then one of my players who is running a dwarf with a CON of 26 suggested that the rate of healing vary depending on the CON of the character. So a character with a higher CON should roll more dice at the end of the rest period. The logic behind this is that if using a simple 1D6 system, a character with a low CON (say a fairy) could fully heal much faster than one with a higher CON (like a dwarf).

I do like the idea of scaling the amount of recovery, but not the idea of simply rolling more dice. Sure, a fairy with a CON of 6 that took 4 hits of damage (63% of CON) could fully recover all his/her lost CON with a single nights rest while a dwarf with a CON of 30 that took 19 hits (also 63% of CON) would need at least four days of rest to fully heal. While both characters lost the same percentage of their CON, the dwarf still withstood injury that could have killed the fairy three times over; this should require more rest. But, characters with higher CON scores are supposed to be healthier, so perhaps they should be able to heal faster.

After a full nights rest (~10 hours) with plenty to eat and drink in a secure location with a roof over your head and a bed to sleep in, make a SR on your base CON. The level of success is the number of D6 rolls you get to make to recover lost CON. So if you manage a Level 3 CON SR, then you recover 3D6 CON. Fumbles are in effect, so if you roll a 3 (3 or 4 in 5th edition) you do not recover any lost CON. No adventure points are awarded for these Saving Rolls.

This Saving Roll based method of regulating short-term CON recovery is not only a very T&T solution, but it gives characters with higher CONs an edge in healing (they are normally healthier and more robust). It should allow these characters to heal minor injuries quickly and to make up some of the huge drops in CON they can sustain without death. But it also allows characters with low CONs to recover quickly every now and then thanks to the "Doubles Add and Roll Over" (DARO) rule for Saving Rolls.

Overall, this house rule allows for quick non-magical healing which can be quite useful in low-magic or even no-magic game settings.
Posted by Dan at 4:30 PM